Empower User Trust in the Sharing Economy by Sara Green 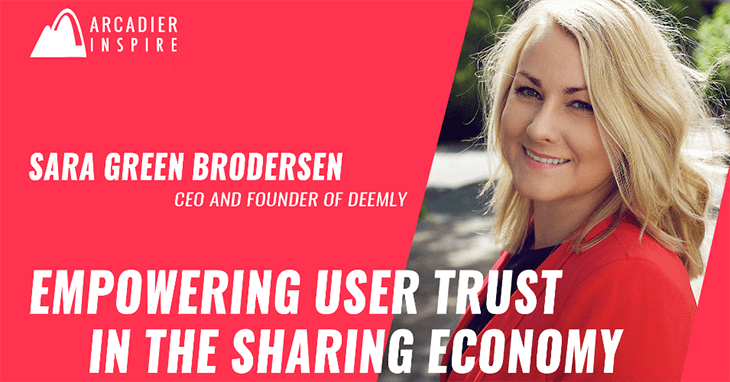 Deemly was created to allow people to create their trust profile across multiple platforms by allowing them to transfer their ratings and reviews across platforms. Sara Green, CEO and co-founder of Deemly, talks about the importance of trust in a sharing economy, being either a huge driving force when used well, or being a barrier to success if implemented poorly.

Now, the biggest questions an entrepreneur may have are:

Fret not, Sara has answered both of these queries, so you don’t have to.

How Trust affects the Sharing Economy

According to Sara, trust is the strongest factor driving people to use sharing economy platforms. A sharing economy, in a nutshell, is a model where peers do business with other peers, and anyone can be both a seller and a buyer. Think of Carousell or Uber. Trust is what allows people to be confident in these transactions: you trust Uber and their drivers, so you can get into what is essentially a stranger’s car, and you trust Carousell, so you can shop without fear.

Without this trust, it’s not hard to see how all these systems would collapse, dysfunctional and unuseable. Sara calls the lack of trust a barrier that prevents users from being engaged, and stresses on the importance of sharing economies to leverage and build trust between the platform, merchants, and the buyers. As the saying goes, trust makes the wheels go round.

How to Build Trust

But the question remains, how? According to Sara, the best way to build trust is through ratings and reviews. Recall how Carousell works again. Sellers and buyers can leave reviews for each other after each transaction, allowing them to build reputations for themselves. Good reputations allow users to trust one another, and facilitates transactions in the sharing economy. In fact, not having a review function in a sharing economy platform is one of the biggest mistakes that companies make.

Aside from a functioning system for reviews and ratings, background checks and ID verification also allow users to trust each other much easier, as these features reassure them that of the integrity of the other users. Including photographs in retail listings is also great, allowing users to feel more confident in a transaction as the product feels more tangible to them. These are just some of the easiest and most efficient methods to building and leveraging on trust.

Entrepreneurs and the Sharing Economy

As the saying goes: in ten years, the sharing economy won’t be called the sharing economy, it’ll just be the economy. The world is moving away from the old economic model, when people only made transactions with designated merchants or suppliers.

People are becoming more conscious of their ability to increase their revenue or reduce their expenditure through the sharing economy. However, they are still skeptical of this new system, and building trust with them is the only way to ensure their continued use of the system. Entrepreneurs will find that it’s best to adapt to the change, and capitalise on the use of trust to draw attention and popularity to their projects.

There is a difficulty that the sharing economy faces though, and that’s the skepticism and criticism so often being directed at it by the government and non-users. Their fear of the system being abused for personal profit is one common reason for the criticism.  For example, people criticised Airbnb, suggesting that it was an incentive for people to purchase houses just to rent them out for profit. This would in turn drive up housing prices in a steep spike. Companies would have to find a middle ground, balancing their methods with the criticism they were given in order to succeed. This is also a form of building trust, as the company demonstrates their willingness to help their users and to prevent any foul play, upholding a reputation of integrity. Thus, responding well to criticism allows for all members of the sharing economy to benefit.