How to Launch an MVP by Rachael Chin 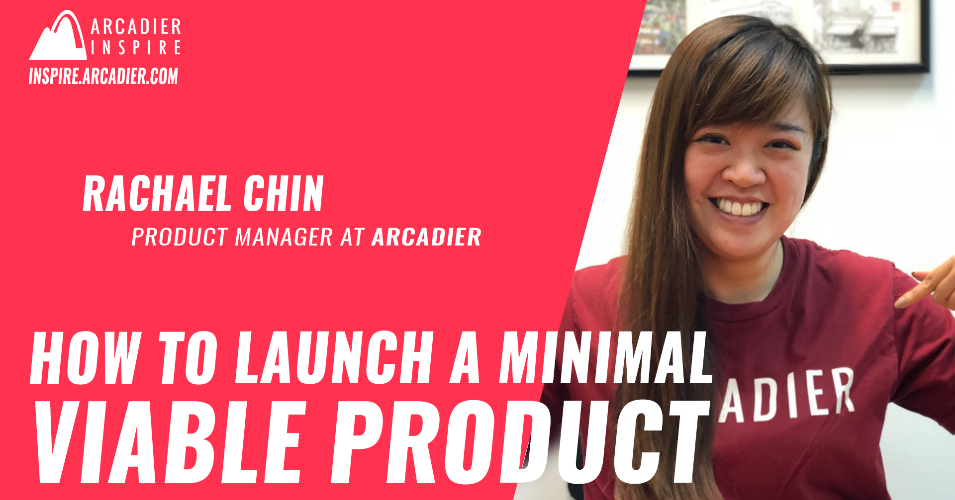 The importance of knowing your market and your customers is undeniable in the business world. Launching Minimum Viable Products (MVP) is one of the best ways to gain feedback from your target users, so you can continue to perfect your product.

Rachael Chin, our very own Product Manager here at Arcadier has given some advice about how to use minimum viable products to enrich your understanding of your intended market.

What is a Minimum Viable Product?

Simply put, it is a new product or website developed with sufficient features to attract and satisfy early adopters.

The goal of launching MVPs is to interact with your market, gaining feedback from the initial users (also known as innovators or early adopters), and also checking whether people are actually interested in your product.

It is absolutely essential to know how receptive people are to your product before you sink in your resources investing in it. One very common mistake that startups make is creating a product and spending all their resources on it, before realising that there was none who wanted it. They were wrong in their most basic assumption that someone was interested in their product in the first place. That is why it is important to launch your MVP, and launch early, before you start spending more resources on your product.

However, that being said, don’t be too discouraged if your MVP launch came back with low receptivity and negative feedback. During product development, you will have to make many assumptions about what your customer wants out of your product, and develop features to satisfy those assumptions. MVP are used to check if those assumptions are correct, and if the assumptions were wrong, it’s up to you to be adaptable and try again with a different set of assumptions. The majority of the time spent during product development is really just a repetitive process of trial and error.

Here are some important things to consider when planning to launch a MVP:

Remember that every product should be a solution that is a problem that people want solved. That’s what makes a product attractive. So before making an awesome, creative, new product, make sure to understand the problem from your customers’ point of view. Put yourself in their shoes and think: “Why would I want this product?”. Afterall, if even you don’t want it, why would anyone else?

The user flow is a chronological list of the steps a person needs to take when using your product. When designing your MVP, make sure it has all the features that are necessary for the user flow to work. Features that add value but are not necessary for the product to work are of lower priority, and can be added later when you have more time and resources. By starting your MVP with just the bare minimum features, you will be able to add new features based off of the initial users’ feedback, to make it more specifically catered to your target customers.

Research into what your competitors are doing. Look out for their weaknesses and target those to create a product that solves part of the problem that the  competitor’s product cannot. For example, Facebook had almost everything, allowing you to play games, write, post pictures and videos and more. Instagram, a new social media platform, didn’t have as many features as Facebook did, but its picture filters, it completely overtook Facebook. Aim to learn from your competitors, and exploit the weaknesses.

MVPs can be extremely simple, and don’t have to be products at all! They just have to be able to test for market demand, and gain feedback. For example, Dropbox’s MVP was just a tutorial video explaining its functions, and that was enough to get it hundreds of thousands of potential customers overnight.

Always go for the cheaper option! MVPs should cost as little as possible, so that you can keep changing and adapting it. Sometimes features that you added to an MVP may be totally unused or straight-up unwanted by the users. Don’t waste money on features until you know for sure that it’s what people want

Launch as early as possible! As Reid Hoffman says, “ If you aren’t embarrassed by the first version of your product, you’ve launched too late. It is absolutely fine for your MVP to be imperfect. After all, the goal of launching MVPs is not to take the world by storm, but to gain feedback for you to improve.