Nothing says it like getting your hands dirty on the ground when all you want to know is how to manage your own start-up. Even at a tender age, Wee Zihuan, better known as Zwee, was already making baby steps in his entrepreneurial journey. Young and hungry for knowledge, he became a self-taught coder by burying himself in dauntingly thick coding books since secondary school.

Zwee, who is one of the youngest entrepreneurs in Singapore, has already two business ventures to his name. He first set up Savant Degrees, a world leading innovation consultancy firm, in 2009 upon graduating from the National University of Singapore (NUS), alongside three coding buddies he knew in primary, secondary and polytechnic days. Prior to that, they have already taken a stab at creating Enterprise Resource Planning (ERP) systems when they did freelance work for hire in their secondary school days.

To this coding aficionado, age is just a number. He did not let people’s preconceived notion of an inexperienced and young lad to stand in his way of setting up Savant Degrees and Eunoia, a foodtech focused platform. Eunoia’s tech solution Ordr allows F&B customers to place orders and pay at the table using their own mobile device. With its order aggregation system, Eunoia automates orders from different ordering platforms into one channel, managing order fulfilment and revenue reconciliation. Its menu management system can help sync menu updates across all food delivery apps, eliminating uploading in different formats.

In the risk-averse society we all live in, many could not even imagine dropping out from the prestigious Stanford University and plunging into the depths of challenges entrepreneurship entails. For that alone, we are truly impressed with Zwee, so when we had the chance, we asked him the million-dollar question:

Arcadier: What made you decide to quit school halfway when you were in Stanford and to pursue your own dreams?

Zwee: I found good rapport with a few friends through the programming assignments we took up outside of school and found that it was a pity to give that up. I did try to juggle school and Savant Degrees for a couple of quarters but found it almost impossible.

Before Stanford, I was already very used to working with my brilliant team members so I continued with Savant Degrees part-time. However, it didn’t work out as it took away too much of my time. If it was a normal part-time job, it’d have still been manageable. When it comes to running a business, you have to think about it every single day — how will you bring in the next project to pay for rent and salaries. It’s certainly more than a full-time job, so I applied for a leave of absence and never got back to school.

Arcadier: Given that you took a keen interest in coding and got hands-on experience since an early age, was Savant Degrees an entrepreneurial dream come true?

Zwee: My partners and I didn’t think about it being a business as we felt it was quite fun to have people pay us to do coding assignments. During June and December breaks, realised we were just taking up new projects and figuring out what to do next. That to us was fun!

When the time came and I graduated from NUS, we asked ourselves; why don’t we do this for real? Hence, setting up Savant Degrees was a really natural progression from what we’ve been doing previously. There’s not exactly a defining decision point and it really didn’t cross my mind to have my own startup. 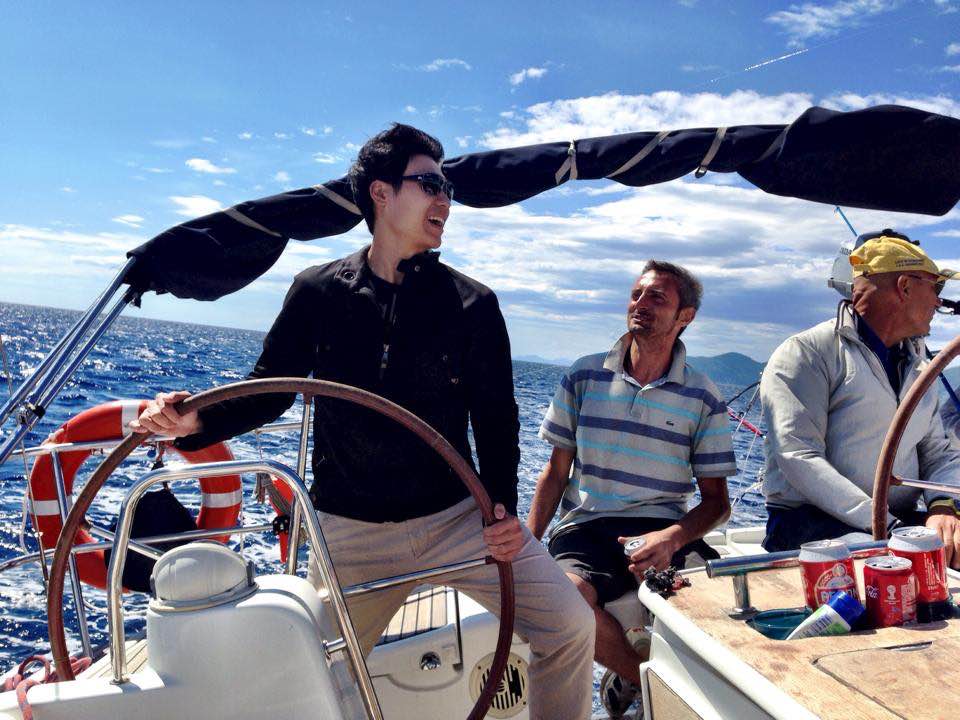 Zwee takes the helm of a private yacht while on an overseas trip. He sure knows how to work hard and play hard. Photo courtesy of Zwee.

Arcadier: In that case what made you believe in doing your own thing and never working for someone?

Zwee: The two parts to this question are pretty interesting. Doing my own thing doesn’t mean I don’t work for anyone. Even though I don’t report to a boss at the end of the day, I’ve clients and they’re pretty much my bosses. At the end of the day, starting and running our own business mean that I answer directly to the end-customers. I’m in fact working for them but have the privilege of directly translating my skills and abilities into value for end-customers, who’re my bosses. Secondly, “never” is a word that shuts all possibilities. Part of the entrepreneurial journey is to figure out the opportunities and finding the “and” instead of the “or”.

Arcadier: What is your key advice to startups when it comes to designing their tech applications? Is it knowing your users’ personas?

Zwee: That’s right, always being out there talking to them is important too. An extension of it is also how to build your minimum viable product (MVP), which relates very closely to the technology adoption lifecycle. In fact, a big part of it goes to the framework. As the first rule in Marketing 101, you can’t target everyone. Go for the innovators and early adopters first.

Zwee: The first would be to pace yourself because entrepreneurship is not a sprint but a marathon. It has to be sustainable. We hear of entrepreneurs in the Silicon Valley working for 2 years before selling their companies for billions of dollars, but these are few and far between. A lot of them actually slog it out for many years to bring their companies to fruition. People usually see all the glory and glamour instead of the difficulty, hardship and rejections endured in the journey. So you need to be able to take that.

Second, find people you trust who can deliver, as that is one of the biggest challenges. Only where the rubber hits the road would you know if the person can perform. Third, get your hands dirty and learn everything. Go out, door knock and pick up business operation skills such as bookkeeping, accounting, managing of profit and loss statements and more. Entrepreneurship is pretty much like taking a mini Master of Business Administration (MBA) in a short span of time. Even if you’re not specialising in business, when it grows bigger, you’ll need some of the knowledge.

While Zwee was cognisant of the huge deal of unfounded optimism he had at a young age, he would still do the same in a heartbeat. It has been a rollercoaster ride but he is content with where he is now. His secret to staying sane lies in finding purpose, which got him through the 100-hour work weeks and depressive moments. Never belittle a young chap with a big dream and purpose.

Jim Tan, President of the Sharing Economy Association of Singapore