In recent years, the on-demand economy has grown to become more prevalent. We are now co-existing with and recognizing a new category of jobs and workers brought about by the wave. While others are arguing whether or not the on-demand economy is here to stay, Fortune 500 companies have taken up partnerships and acquisitions of innovative on-demand companies, from the Amazon-backed Housejoy in India to Uber’s partnerships with renowned brands across industries.

It’s hard to argue against the fact that the on-demand economy — defined as “economic activity created by digital marketplaces that fulfill consumer demand via immediate access to and convenient provisioning of goods and services” — has brought profound changes to the way we work and also consume goods and services.

There are many things that brick-and-mortar businesses and large firms can learn from the way on-demand marketplaces streamline efficiency and provide operational flexibility. To survive, businesses should constantly challenge themselves to adapt. Otherwise, they might get left behind and lose out in the rat race.

For Uber, one of the most well-known on-demand firms on the planet, new business opportunities come in the form of marketing deals with industry giants in the financial services, automotives, fast moving consumer goods, and hospitality sectors. On-demand companies are trending, and the numbers don’t lie: Didi Kuaidi, a ride hailing service in China, handles 3 million rides per day, while Grab had more than 3.8 million mobile application users across Southeast Asia as of 2015. Uber alone has made its services available in 400 cities across 68 countries.

The number of participants in the on-demand economy presents new business opportunities for other firms to tap into, and knowing that on-demand firms all across the globe have attained media darling status, any partnership with them is sure to reach the masses. All eyes are on them to see what their next move will be.

Uber, the clear leader in the ridesharing market, has been a champion in realizing new economic and revenue stream possibilities. The platform that combines real-time, mobile, and social elements is an impetus for new models of collaboration. Let’s take a look at how Uber and its partners are doing it:

Traditional brands are constantly trying to reach new connected customers. In particular, they want exposure to Uber’s sizable user base.

On October 21 last year, a date known to fans as “Back to the Future” Day, Uber partnered with Pepsi to offer users in London free rides in a DeLorean (the iconic car from the movie). Passengers and onlookers were in awe, snapping photos of the car and the complimentary Pepsi beverage packaged in a vintage bottle. BMW has done something similar recently to promote the new BMW 7 Series.

Advertising or brand partnership is hardly a new. Even traditional taxi companies have been there, done that. However, Uber provides more than just a service with ads to its audience; it adds an experiential value to Uber rides. It also gains exposure from the partners themselves, as seen in the video, helping them reach a different, perhaps broader, audience. Who knows, anyone can be the next user to receive a pleasant surprise from Uber.

Reaching and retaining customers is as much a challenge for Uber as it is to traditional brands. With the number of options and accessibility to other ride-sharing services, Uber’s partnership with Starwood Hotels & Resorts is indeed strategic, especially because at least one Starwood property (Aloft, Element, Four Points, Le Meridien, Sheraton, St.Regis, The Luxury Collection, W Hotels, or Westin) is present in most cities where Uber operates.

Starting early 2015, Uber users who sign up to become new or are existing Starwood Preferred Guest (SPG) members simply need to link their accounts on the SPG website. SPG members can start earning one Starpoint for every $1 spent on Uber after completing a qualifying stay at a Starwood hotel. Uber even gave away free Starpoints and a free night at a qualifying Starwood hotel to lucky riders.

This is what’s called killing two birds with one stone, for both firms and also for the customers. The creative new loyalty programme not only allows Uber’s users to become Starwood’s loyal customers, but it also encourages Starwood guests to start using Uber regularly. 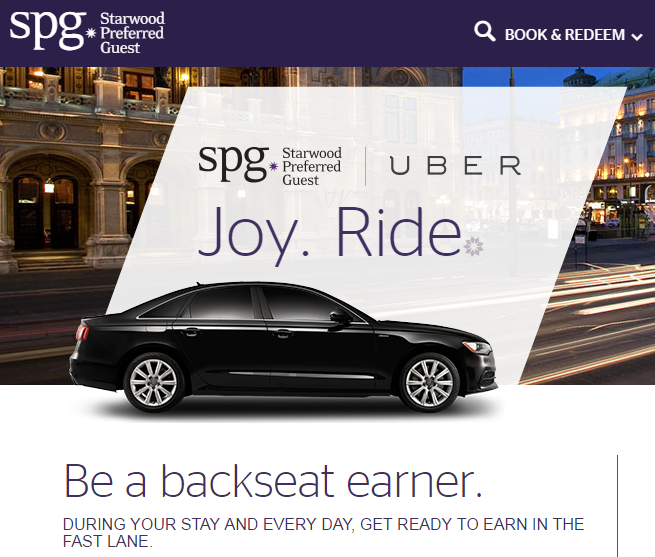 Hilton, a major competitor of Starwood, certainly didn’t want to miss out on the opportunity. Later that same year, Hilton and Uber developed a new feature on Hilton reservation emails called Uber ‘Ride Reminders’ through your. Guests receive automated notification on the day of travel to seamlessly request an Uber ride to the hotel, or to local destinations.

Rich DiStefano, Senior Director of Mobile Products at Hilton Worldwide stated: “By partnering with Uber, a leading innovator, we’re helping travelers explore destinations like they’re locals. This is the first time any company has leveraged Uber riders’ most frequented destinations to provide local recommendations. We’re excited to offer these unique benefits for our loyal guests.”

The partnership was a success. Hilton Worldwide reports that “within four months of its launch, almost one-fifth of HHonors members who engaged with the app prior to or during their stay explored the Local Scene, a list of the most popular venues in a market based on the destinations of Uber riders in that area.” Hilton and Uber took their partnership even further, incorporating new features to seamlessly connect Hilton guests to Uber and vice versa on their respective mobile apps. 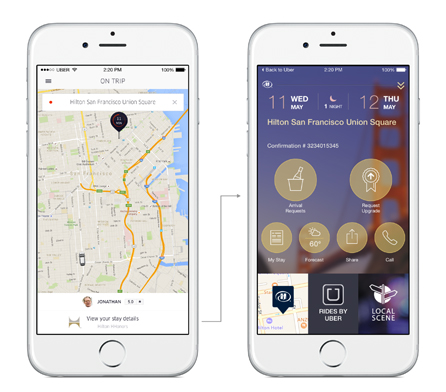 One of Uber’s first major partnerships was perhaps with PayPal. Users were allowed to add their PayPal account and sign up with a promo code to receive discounts. In June 2016, Uber announced that it partnered with Capital One Financial Corporation. Through March 2017, every 10th ride up to $15 is free with Capital One Quicksilver or QuicksilverOne cards. Inside the Uber app, there’s now a Payment Rewards feature for users to discover, track, and redeem rewards. Uber will be looking to add more partners for Payment Rewards in the future.