The Latest Buzz: 7 Used Goods Marketplace Platforms in the US

In Asia, we have successful ecommerce marketplace platforms like Carousell, Trezo or Duriana. Not surprisingly, the latest buzz in online marketplaces in the US lies in the sale of used and pre-owned goods. This January, Letgo raised a whopping $175 million for its used goods marketplace, and Facebook entered the sharing economy scene late last year with Facebook Marketplace.

According to a Collaborative Economy Report, the USA remains the top sharer among developed countries in the last 3 years, with an average of 25% growth. In 2015, there were 105 million sharers in the US alone. In fact, for ecommerce marketplace solution provider Arcadier, USA is its biggest market, accounting for over 30% of the total number of SaaS marketplaces built on Arcadier’s platform.

Here’s a list of 7 used goods marketplace platforms in the US you should know about:

Dubbed “the would-be Craigslist killer” by TechCrunch, Letgo has reportedly raised at least $325 million to grow its used goods marketplace in the US. The startup previously merged with its rival, Wallapop, and has sold over $20 billion in gross merchandise value through its platform.

Letgo shows the approximate location of a listing. Although it offers shipping options, it encourages users to interact via an in-built chat feature to arrange an in-person sale. Besides a seamless chat feature, Letgo also has proprietary software that allows for users to upload products to the online marketplace platform instantly. It also gives you the option to create an ad for your listing through an easy-to-use video template.

At this time, Letgo is free to download and does not charge its users any commission and listing fees, or shipping fees. It also does not assist with disputes. This former decision is a much debated one, but is proven by Alibaba to be an effective strategy to compete with online retail giants. Letgo is now valued at close to $1 billion. 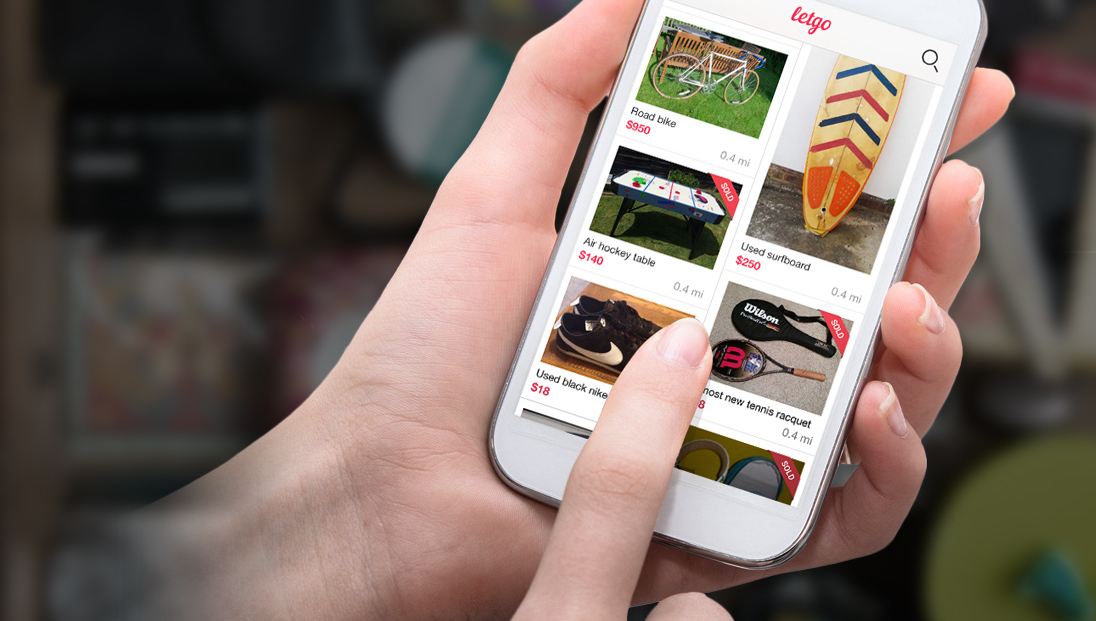 Branded as a fashion resale website, ThredUp was founded in September 2009 as a P2P marketplace platform for swapping clothes. By 2015, ThredUp had raised over $125 million, including an $81 million Series E round led by Goldman Sachs Investment Partners. 25,000 brands ranging from Louis Vuitton to Old Navy are available on the site.

Headquartered in San Francisco, ThredUp has opened regional processing centers across the country to expedite shipping and handling. The company sends customers pre-paid, pre-addressed bags to users who intend to sell their used clothes. ThredUp’s employees photograph, list and sell the items on the site, and handles shipping to buyers.

For items with an initial listing price of $59.99 or less, ThredUp pays the seller up front, which typically amounts to 10-40% of the anticipated selling price. More expensive items are listed on a consignment basis, for which sellers usually keep 50-80% of the sales price when the item is sold.

Just last November, mobile-first marketplace OfferUp confirmed that it had raised $93 million in funding and has a user base of millions. Based in Bellevue, Washington, OfferUp is known for its TruYou system, which verifies the identity of buyers and sellers through ID scan and selfie. The app allows users to take photos, add details, and instantly upload a listing. Item listings on OfferUp show an asking price, but buyers can always make an offer and negotiate through the chat system.

Because the search is location-based, OfferUp requires users to connect their account with a Facebook profile. As part of its trust and safety program, the app also has a rating and review system and moderators to make sure the items sold on the platform conforms to its guidelines. Payments are not done through the app. If a seller accepts the buyer’s offer, they can set up a time and place to meet up.

This Redwood City, California, company has been around for 6 years and claims to have as many as 2.5 million users. It has raised over $70 million in funding and boasts celebrity investors the likes of Ashton Kutcher and Rachel Zoe.

Now one of the largest social marketplaces for fashion in the US, Poshmark has gained a reputation for being not just an app for which users can make money, but also a social platform where they can make friends who are passionate about fashion. Every seller on Poshmark is called a Seller Stylist. In fact, more than half of shoppers on Poshmark are repeat buyers from the same boutique on its site.

Poshmark also organizes Posh Parties, which are virtual shopping events where the community can meet in-app to sell/shop and share their look. To boost real-time engagement, this year, Poshmark launched Posh Now, which alerts shoppers when new merchandise is available and provides the community with instant, in-app updates from Seller Stylists who are listing live in the app. This came about when Ashton Kutcher launched his closet on the app and it sold out within minutes. 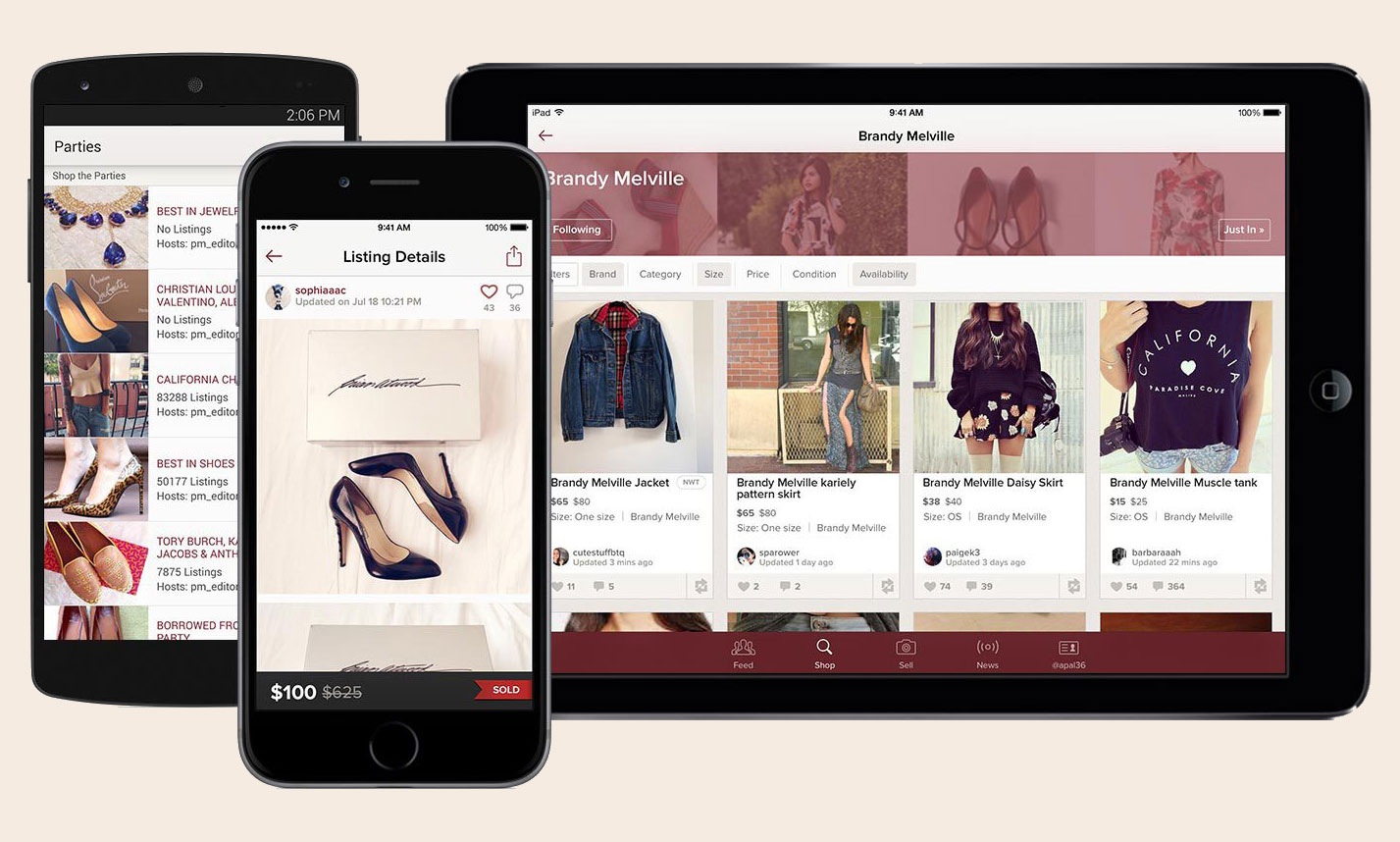 In late July 2016, Japanese peer-to-peer marketplace Mercari was ranked number 3 in the US iOS Top App Charts. Valued at over $1 billion, Mercari is known as Japan’s first and only unicorn. In 2014, the year the app launched in the US, Mercari opened a San Francisco office, and in 2106, another in Portland, Oregon. There is no commission for selling items in the US. However, Mercari charges a 10% commission fee in Japan.

Mercari’s growth in the US market is promising. However, it still has plenty to learn. CEO Shintaro Yamada says that the US operation is “suffering from 10 times more fraud than its Japanese platform.” There’s also a cultural difference around returns, resulting in a much bigger customer service load in the US compared to Japan.

Founded in 2012, Tradesy’s total equity funding amounts to $74.5 million. This P2P marketplace specializes in designer fashion. The company deducts 14.9% commission from each sale. Among the services it renders, Tradesy provides an authenticity guarantee, pre-paid and pre-addressed shipping labels and packaging materials. It also recommends pricing during the listing upload process and handles returns. Tradesy uses advanced technology to automatically detect and remove any replica items listed on the site.

Since 2016, the Santa Monica company has partnered with a consumer returns startup offering in-person returns. Tradesy shoppers can return merchandise in person for immediate credit. This program has seen strong customer adoption and resulted in high customer satisfaction and cost savings.

Apparently, Facebook Marketplace has been around since 2007. It was only in 2016 that Marketplace relaunched and reappeared in the limelight. However, Facebook is now moving to a location-based selling model and making Marketplace a more noticeable feature on Facebook’s mobile app. According to Facebook, 450 million people already use it to buy and sell items every month.

From the app, you can view items based on the pages you’ve liked and message the seller (through a messaging feature that lives within the Marketplace tab) and place your offer. Sellers can upload items in just a few steps and even post it on Facebook groups. Facebook does not charge any fees, nor does it offer protection or dispute resolution. 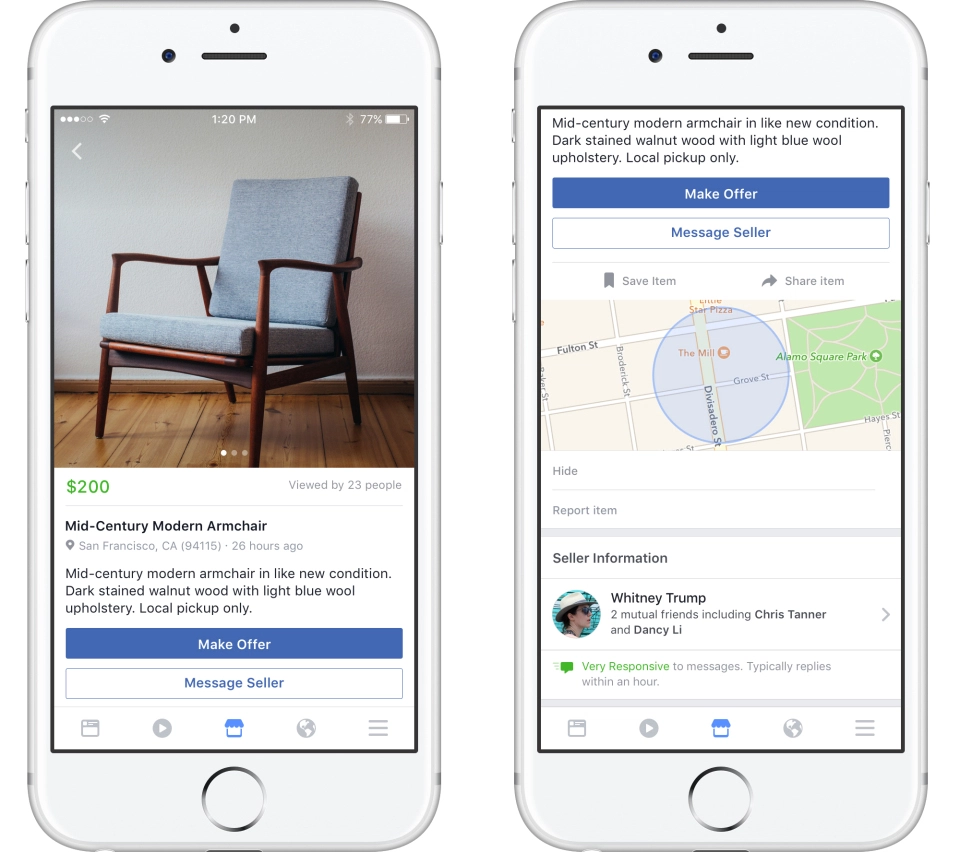 Challenges in Adapting Traditional Business to an E-Commerce Marketpla...